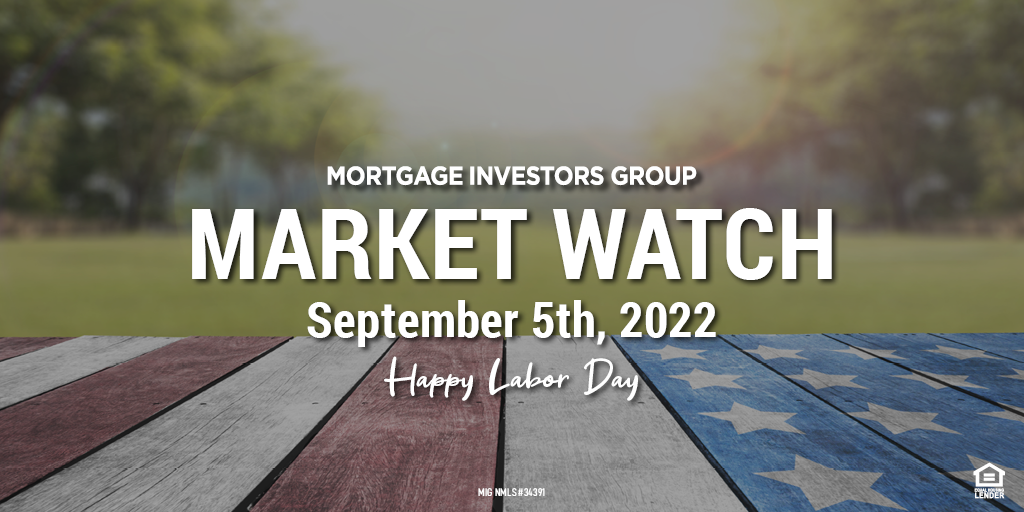 Mortgage bond prices finished the week sharply lower which put upward pressure on rates. Volatility was the norm. We started the week on a negative note, had small positive movements Tuesday, traded off Wednesday and Thursday morning, only to finish with some positive movements Thursday afternoon and Friday morning. Inflation was the dominant fear as the Fed’s stance on continued elevated rates pressured bond prices lower and rates higher. The data was very mixed. The FHFA house price index rose 0.1% vs 0.8%, Consumer confidence was 103.2 vs 97.9. ADP employment was 132K vs 315K. Weekly jobless claims were 232K vs 255K. Productivity fell 4.1% vs the expected 4.5% decline. Unit labor costs rose 10.2% vs 10.7%. ISM Index was 52.8% vs 51.8%. Mortgage interest rates finished the week worse by approximately 3/8 to 1/2 of a discount point.

The US Bureau of Labor Statistics reported last Friday, “Total nonfarm payroll employment increased by 315,000 in August, and the unemployment rate rose to 3.7 percent.” Analysts expected an increase of 300,000 payrolls and an unemployment rate of 3.5 percent. “In August, the unemployment rate rose by 0.2 percentage point to 3.7 percent, and the number of unemployed persons increased by 344,000 to 6.0 million. In July, these measures had returned to their levels in February 2020, prior to the coronavirus (COVID-19) pandemic.” “Nonfarm employment has risen by 5.8 million over the past 12 months, as the labor market continued to recover from the job losses of the pandemic-induced recession. This growth brings total nonfarm employment 240,000 higher than its pre-pandemic level in February 2020. In August, notable job gains occurred in professional and business services, health care, and retail trade.”

The change in total nonfarm payroll employment for June was revised down by 105,000, from +398,000 to +293,000, and the change for July was revised down by 2,000, from +528,000 to +526,000. With these revisions, employment in June and July combined is 107,000 lower than previously reported. (Monthly revisions result from additional reports received from businesses and government agencies since the last published estimates and from the recalculation of seasonal factors.)”