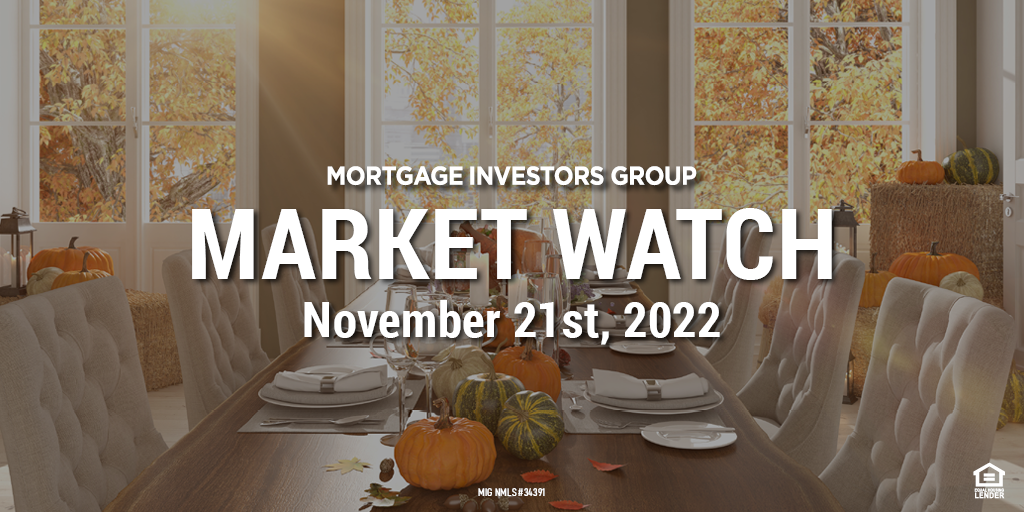 Mortgage bond prices finished the week near unchanged which held rates flat despite considerable volatility throughout the week. Fed Governor Christopher Waller said on Sunday the October inflation report was “just one data point.” St. Louis Fed President James Bullard noted that “the policy rate is not yet in a zone that may be considered sufficiently restrictive.” The data was mixed. Producer prices rose 0.2% vs 0.4% and the core was unchanged vs 0.3%. Industrial production fell 0.1% vs unchanged. Capacity use was 79.9 vs 80.3. NAHB housing was 33 vs 36. Retail sales rose 1.3% vs 0.9%. Housing starts were 1425K vs 1410K. Weekly jobless claims were 222K vs 225K. The Philadelphia Fed business conditions index was -7.1 vs -5.0. Existing home sales were 4.43M vs 4.38M. LEI fell 0.8% vs down 0.5%. Mortgage interest rates finished the week with no changes in discount points.

Durable goods orders are generally believed to be a precursor of activity in the manufacturing sector because manufacturing must have an order before considering an increase in production. Conversely, a decrease in orders eventually causes production to be scaled back; otherwise, the manufacturer accumulates inventories, which must be financed.

Unfortunately, durable goods orders data has many drawbacks. The first problem with the orders data is that they are extremely volatile. The volatility of the data usually is attributed to the civilian aircraft and defense components of the figure. For example, if Boeing has a big order for one of its jumbo jets, the civilian aircraft category can change by $3-4 billion. The same scenario is evident when an aircraft carrier is ordered, surges in the defense category result. The second problem with the data is that orders are continuously being revised. There are many times in the past when the advance report on durables showed an increase while a revision a week later showed a decrease. The revised data is found in the report on manufacturing orders, shipments, and inventories.

Since the data is very volatile and difficult to forecast, there is quite often a huge disparity between the actual release and the initial projections. Despite the variances the report has the potential to cause mortgage interest rate volatility. Therefore, borrowers should be cautious heading into the data considering this is a holiday week with trading conditions likely to be thin.