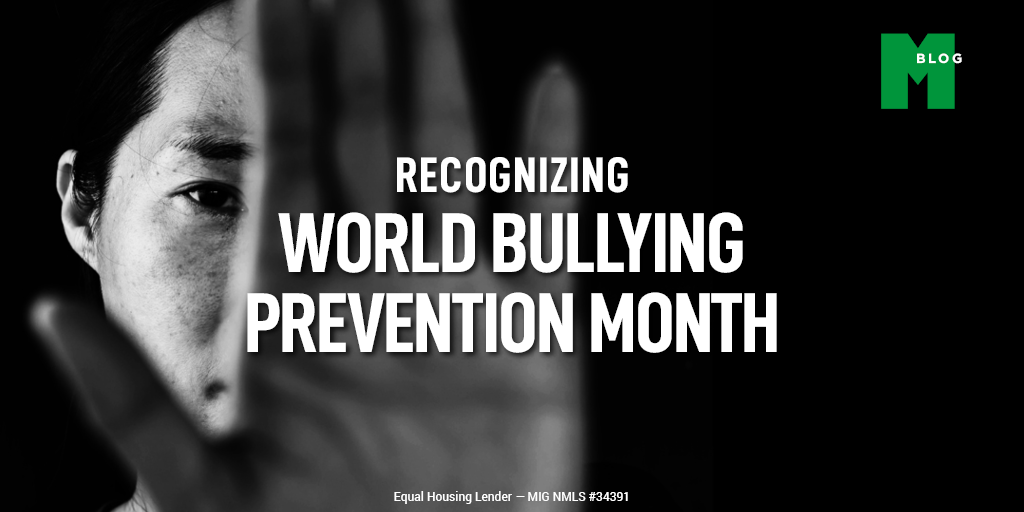 October is World Bullying Prevention Month. The designation began in 2005 and is a great time to understand bullying and do your part to help reduce the instances of bullying.

From PACER’s National Bullying Prevention Center, here are some startling statistics about bullying:

These numbers are startling, but there are actions we can all take to combat bullying in our communities and schools.

Understand Bullying in All Its Forms

Sometimes bullying is obvious, while other times it’s subtle. Either instance, however, can be damaging to the receiving person’s self-worth and confidence.

According to youth.gov, the definition of bullying is “unwanted, aggressive behavior among school-aged children that involves a real or perceived power imbalance. The behavior is repeated, or has the potential to be repeated, over time.”

Many cities across the United States are holding “Run, Walk, Roll Against Bullying” events on October 6 that shed light on bullying in their communities. If one is in your city or within driving distance, join and show your support.

If you have children, nieces and nephews, or other school-aged kids in your life, talk to them about bullying. Point out that it’s unsocial behavior and ask them to commit to never bully anyone.

If you know a child who’s being bullied, talk to them, too. Show them you care and share ways they can handle and stop it.

Post resources and information about bullying on your social media channels. Use the hashtags #Bekind #antibullying #bullyingprevention #bullyingawareness to your posts for maximum reach. By adding your voice to the mix, you can help get the message out and shed light on this serious problem. Lead by example and show kindness toward your family, friends, neighbors, and co-workers. Check your negative comments before you say them and think about your actions before you take them. By being kind, you can show the children who look up to you how a responsible, kind-hearted person should treat others.

Create or join a group that encourages dialogue with elected officials about their roles in preventing bullying. Want to enact change at every level? USA.gov makes it easy to find contact information for your federal, state, and local elected officials.

School-based bullying prevention programs are estimated to decrease the instances of bullying by 25%.

Help teachers you know understand their part in stamping out bullying in schools. Encourage them to have open dialogue with parents and students about the problem. Keep an open line of communication open with your child(ren)’s teachers to stay in touch with what is happening at your local school.

Be Aware of Resources

There are valuable resources available and easy to access to learn more about bullying and how you can help prevent it from happening.

Bullying is a prevalent, anti-social behavior that goes on every day in schools across the country. The instances have damaging, long-term mental and physical issues for the person who was bullied. During World Bullying Awareness Month, make a contribution of your time and attention to this pressing issue. You’ll feel good that you did, and you may prevent one or more children from suffering from bullying.