Ready For A Fall Movie Marathon?

Ready For A Fall Movie Marathon? 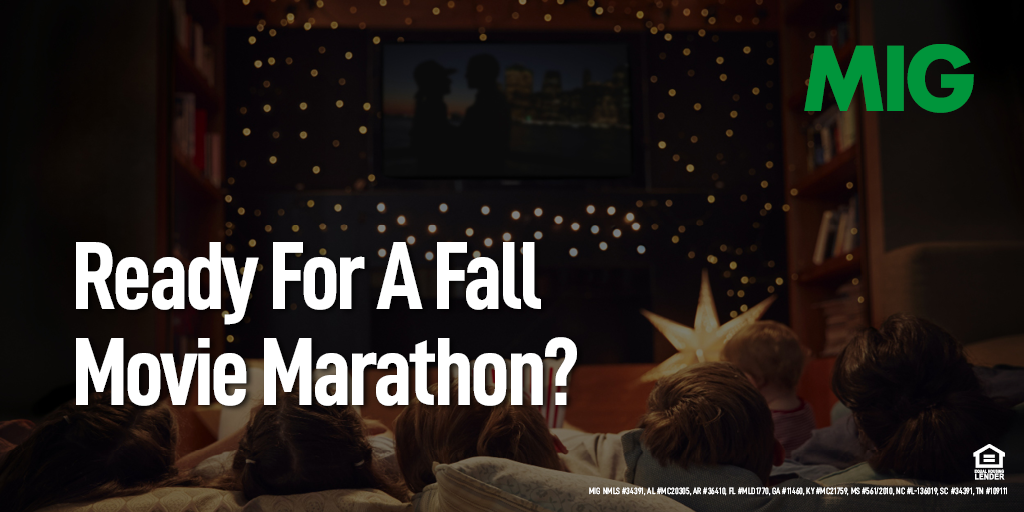 The weather is turning cooler, and that means it’s the perfect time to wrap up in a warm blanket with a hot mug of cider and watch a movie. We put together this list of our 29 favorite fall movies to get you ready for the season. 1. “Casper” – Based on the cartoon, “Casper The Friendly Ghost”, this 1995 film tells the dark but humorous story of an afterlife therapist and his daughter hired to rid a house of spirits, and they meet friendly young ghost Casper instead. Watch the trailer.

2. “Dead Poets Society” – This movie starring Robin Williams is about an unorthodox teacher who uses poetry to encourage self-expression in his students. Watch the trailer.

3. “Hocus Pocus” – A young boy struggles to fit in after he moves to Salem, then awakens the three Sanderson sisters, witches who were executed in the 17th century. Max must defeat the witches before they can suck the life out of all the children in Salem. Watch the trailer.

4. “Sleepy Hollow” – This 1999 film directed by Tim Burton stars Johnny Depp and Christina Ricci. Constable Ichabod Crane travels to Sleepy Hollow to investigate a series of decapitations. The locals are convinced the murderer is the ghost of the headless horseman. Watch the trailer.

5. “You’ve Got Mail” – Tom Hanks and Meg Ryan star in this romantic comedy about two bookstore rivals who unknowingly fall in love with each other while talking anonymously online. Watch the trailer.

6. “October Sky” – Based on a true story, this 1999 film stars Jake Gyllenhaal as Homer Hickam, a young boy who decides to build his own rocket after the launch of Sputnik. His father does not approve. Watch the trailer.

7. “Good Will Hunting” – Will Hunting (Matt Damon), is a self-taught genius when it comes to mathematics, but he works as a janitor at MIT. Will is forced to see a psychologist (Robin Williams) to get his life back on track. Watch the trailer.

8. “The Nightmare Before Christmas” – In this Tim Burton classic, king of Halloween Town Jack Skellington discovers Christmas Town, and confusion ensues as he tries to bring Christmas to his home. Watch the trailer. 9. “While You Were Sleeping” – Lucy, played by Sandra Bullock, gets herself into a bit of an awkward situation when she pretends to be the fiancé of a stranger she has a crush on who is in a coma. Watch the trailer.

10. “The Cider House Rules” – In this film a young boy grows up in an orphanage and while there, is trained to be a doctor. When he’s old enough, he decides to leave to see the world outside the orphanage. Watch the trailer.

11. “Little Women” – Based on the novel by Louisa May Alcott, this movie tells the tale of the March sisters as Jo March reflects back on her life. Watch the trailer.

12. “Halloweentown” – In this Disney Channel movie, 13-year-old Marnie Piper learns she is a witch, but her mother is against her grandmother training her. When supernatural residents of Halloweentown start disappearing, Marnie and her siblings must work with her grandmother to defeat an evil demon. Watch the trailer.

14. “The Village” – Written and directed by M. Night Shyamalan, this film is about a village whose inhabitants fear the creatures that lurk in the woods. Watch the trailer.

15. “Legends Of The Fall” – This film is a historical drama Western set in the early 20th century. Three brothers and their father living in the Montana plains must deal with nature, history, war, and love. Watch the trailer. 16. “Practical Magic” – The two Owens sisters are witches who carry the family curse that the men they fall in love with will die. They must use their powers and their wits to fight the curse and other supernatural forces. Starring Sandra Bullock and Nicole Kidman. Watch the trailer.

17. “Remember The Titans” – Based on a true story, this film follows an African American coach newly appointed as head coach of a high school football team. The team has to work through the challenges of race integration amongst themselves and their community. Watch the trailer.

18. “Edward Scissorhands” – In this Tim Burton film starring Johnny Depp, a man with scissors for hands is introduced to suburban life and tries to fit in while falling in love with a teenage girl. Watch the trailer.

19. “When Harry Met Sally” – Harry and Sally have been friends for years, but haven’t taken things to the next level because they fear intimacy could ruin their friendship. Starring Meg Ryan and Billy Crystal. Watch the trailer.

20. “Rudy” – In this film a boy named Rudy who has always been told he’s too small to play football, fights to prove that he can fulfill his dreams of playing for Notre Dame. Watch the trailer.

21. “The Blind Side” – Based on the true story of Michael Oher, a homeless boy taken in by a caring woman and her family goes on to become a first round NFL draft pick. Watch the trailer.

22. “Stepmom” – When Jackie discovers she is terminally ill, she must deal with her emotions towards her ex-husband’s fiancé who will soon become her children’s stepmom. Watch the trailer.

23. “Julie And Julia” – Starring Meryl Streep and Amy Adams, this film intertwines Julia Child’s rise to fame with a food blogger trying to cook her way through Child’s first book. Watch the trailer.

24. “Harry Potter” – You can’t go wrong with an eight-film marathon to get the full experience of watching Harry Potter and his friends learn the art of magic and fight the evil wizard Voldemort. Watch the trailers.

25. “Sleepless In Seattle” – After hearing a widowed father on a late night radio show, a woman sets out to discover his identity, and ends up falling in love. Starring Tom Hanks and Meg Ryan. Watch the trailer.

26. “Rushmore” – Max is an eccentric teenager who spends all his time on extracurricular activities instead of academics. He and an unhappy industrialist become friends, until they fall for the same woman. Watch the trailer.

27. “Dan In Real Life” – Starring Steve Carrell, this film is about a single dad who falls in love again, only to realize the woman is his brother’s girlfriend. Watch the trailer.

28. “Autumn In New York” – Will Keane is a 48-year-old playboy who falls in love with a woman wo has less than a year to live. Watch the trailer.

29. “Sweet November” – After his life takes a turn, a man (Keanu Reeves) spends one month with a woman (Charlize Theron) unlike anyone he’s ever met on the promise that in that short period of time she will change his life for the better. Watch the trailer.

No matter what time of the year it is, these movies are sure to encourage family time and cozy togetherness!