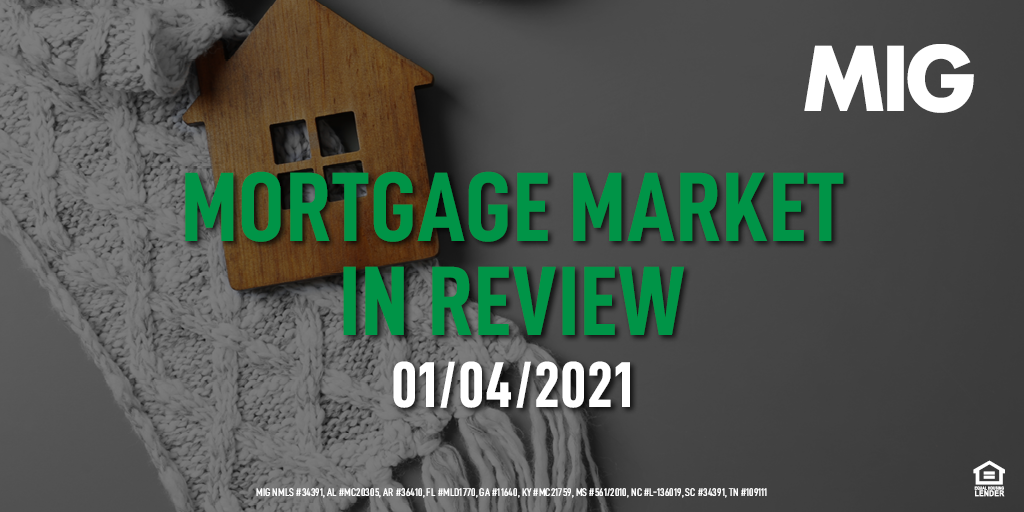 MARKET COMMENT
Mortgage bond prices finished the week higher which recovered the losses from the prior week. Rates gradually creeped positive throughout most of the week in a slow and steady manner. The passage of another round of stimulus spending resulted in positive stock movements most of the week. Continued billion-dollar Fed MBS purchases helped mortgage rates remain historically favorable. There was not much data and thin trading conditions dominated surrounding the holidays. Weekly jobless claims were 787K vs the expected 790K. Continuing claims were 5.219M vs the expected 5.390M. Mortgage interest rates finished the week better by approximately 1/4 of a discount point.

YEAR AHEAD
The future of the economy will continue to be debated. The recent data, Fed statements, and Fed action clearly signal continued low mortgage rates. The biggest concern recently has been the extreme stock strength and potential bubbles in stocks and housing. Stocks extended record highs and some analysts anticipate additional surges in the months ahead. However, the possibility for bumps along the way are real. Trade tensions between the US and China are expected to simmer as the new US Administration takes office.

The positive for us is that the Fed is clear that they want to keep rates low this year. Their most recent statement indicated the “Committee will continue to increase its holdings of Treasury securities by at least $80 billion per month and of agency mortgage-backed securities by at least $40 billion per month until substantial further progress has been made toward the Committee’s maximum employment and price stability goals. These asset purchases help foster smooth market functioning and accommodative financial conditions, thereby supporting the flow of credit to households and businesses.”

Now is a great time to take advantage of these historically favorable rates as the Fed also noted they are “prepared to adjust the stance of monetary policy as appropriate if risks emerge.”