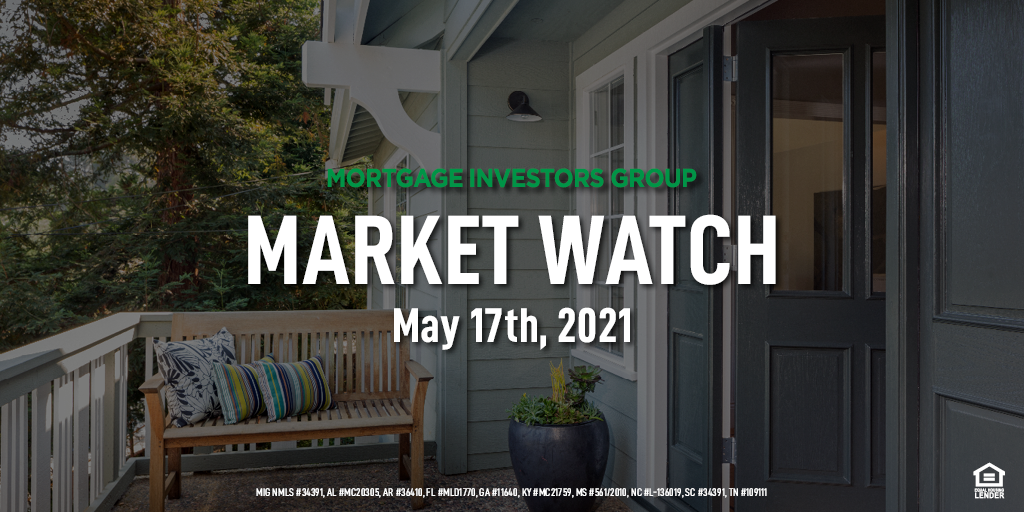 Mortgage bond prices finished the week sharply lower which put significant upward pressure on rates. We started the week on a negative note and did not receive any reprieve until Thursday and Friday. Inflation fears reignited and rates worsened. The consumer and producer inflation readings were higher than expected. The rest of the data was mixed. Retail sales were unchanged vs the expected 2.2% increase. Industrial production rose 0.7% vs the expected 1% increase. Capacity use was 74.9% vs 75.1%. Consumer sentiment was 82.8 vs 91. Weekly jobless claims were 473K vs 490K. The cyber-attack on a major east coast pipeline caused widespread gas disruptions and economic instability. Mortgage interest rates finished the week worse by approximately 7/8 to one full discount point.

Inflation fears hit mortgage bonds last week which pushed mortgage interest rates higher. We recently received warnings from major market participants such as Warren Buffett that inflation is already being felt across a multitude of businesses. Until recently, the official government statistics did not show any surges. That all changed last week.

Producer prices rose 0.6% vs the 0.3% increase. The core, which excludes volatile food and energy prices, rose 0.7% vs 0.4%. The consumer and producer price data often diverges as it is thought that producers can hold back price increases for a little before passing them to consumers. The data this week showed inflationary pressures on both sides. The consumer price index rose 0.8% vs the expected 0.2% increase. The core rose 0.9% vs the expected 0.3% increase.

Inflation, real or perceived, erodes the value of fixed income investments such as mortgage-backed securities. This causes prices to fall and rates to rise.

Of course, nobody needs government data to understand that prices have risen on most things recently. The prices of gasoline, lumber, building materials, and even groceries are evidence of that. The same is true for mortgages last week.

While nobody can predict the future, the possibility of continued mortgage interest rate volatility is real. Now is a great time to take advantage of rates and avoid future uncertainty.